Few determine fate as certainly as deities and playwrights. Like gods, writers construct and puppeteer their own universe, prescribing its rules and making its citizens love, fight, and die.

And so it’s with generosity and a hallowed sensitivity that Will Arbery empowers his characters with a writerly gift — he allows them, too, to be the masters of their own worlds. With this power, Will’s characters distinctly choose not to make others bend to their will; they simply want to be of service. In each of his plays, a character takes on some self-championed role — one no one assigned them but themselves, and roles they often relate to divine beings. This prominence Will grants everyday and, especially, sidelined humans suggests that they too are worthy of witness and exaltation, and by spotlighting them and their isolation, Will zeroes in on humans’ shared pang: our keen desire to be of use.

In Claustrophile, Will’s propulsive, maximalist portrait of unseeded Wyoming land and the people who gather to nourish it, Bob shares his 18 acres to create something akin to an artist’s retreat. He generates a web of internet ads to attract guests, aiming to cultivate their talents and create a home for lost souls. As each scene unfolds, a new character appears — a runaway teen, an abandoned son, a pizza deliveryman, and more. In his expanding home, Bob hatches a plan to create a larger, shared haven: he will use the wood from his house to build an ark, a new Wyoming, modeled after the world’s largest schooner that sank off the coast of Nantucket in 1924.

“I’m like Noah,” Bob tells his comrades, “screaming because he wants so many things, but really just one thing, one holy thing. This is a city. I say it is and so it is. A city founded not on love, but on people doing whatever the fuck. I don’t know. I’m not a god. I just want the body heat.”

“Will zeroes in on humans’ shared pang: our keen desire to be of use.”

The lonesome Gordon also sees himself as a divine servant in Will’s play Wheelchair, a poignant love letter to a man with the rare neurological disorder Moebius Syndrome. In this play, which had a developmental staging at Dixon Place before being published by 3 Hole Press in 2018, Gordon relies on a walker for mobility, his Barbra Streisand records for company, and the internet for virtual connection with strangers. But when his niece tells him she has sold his apartment, Gordon’s fragile world is cataclysmically upended.

“I am one of 36 special people in the world,” Gordon tells his niece, referring to the lamed-vavniks, who, in some branches of Judaism, represent 36 “righteous ones” whose call is to justify the purpose of humans in the eyes of God, “and were it not for us, all of us, if even one of us was missing, the world would come to an end… I often save the world! Sometimes just by praying. Sometimes just by going to the bathroom. Sometimes just by listening to Barbra Streisand.”

Perhaps it is Will’s upbringing in a devout household that makes him continually evince the beauty of those who are suffering; it’s an enormously Christian act to do so. But if this is the sunnier side of Catholicism, Will’s play Plano uncovers its dark underbelly. Produced by Clubbed Thumb at Summerworks in 2018 and then remounted for a smash encore run earlier this year, Plano is an athletic, time-warping craniotomy of three Catholic Texan sisters’ psyches as they battle the male demons in their lives — and in their imaginations. The trio’s youngest sister, Isabel, gives every shred of herself to others, helping pregnant women and working at altruistic non-profits, but still can’t pin down what God’s mission for her is. Simultaneously, a faceless man sneaks into her bed, personifying (among other nightmares) the trauma past, present, and future of inherited patriarchal Catholicism, where women often inhabit repressed, domesticated positions. Exhausted and inspired, she attempts to make sense of her anguish: 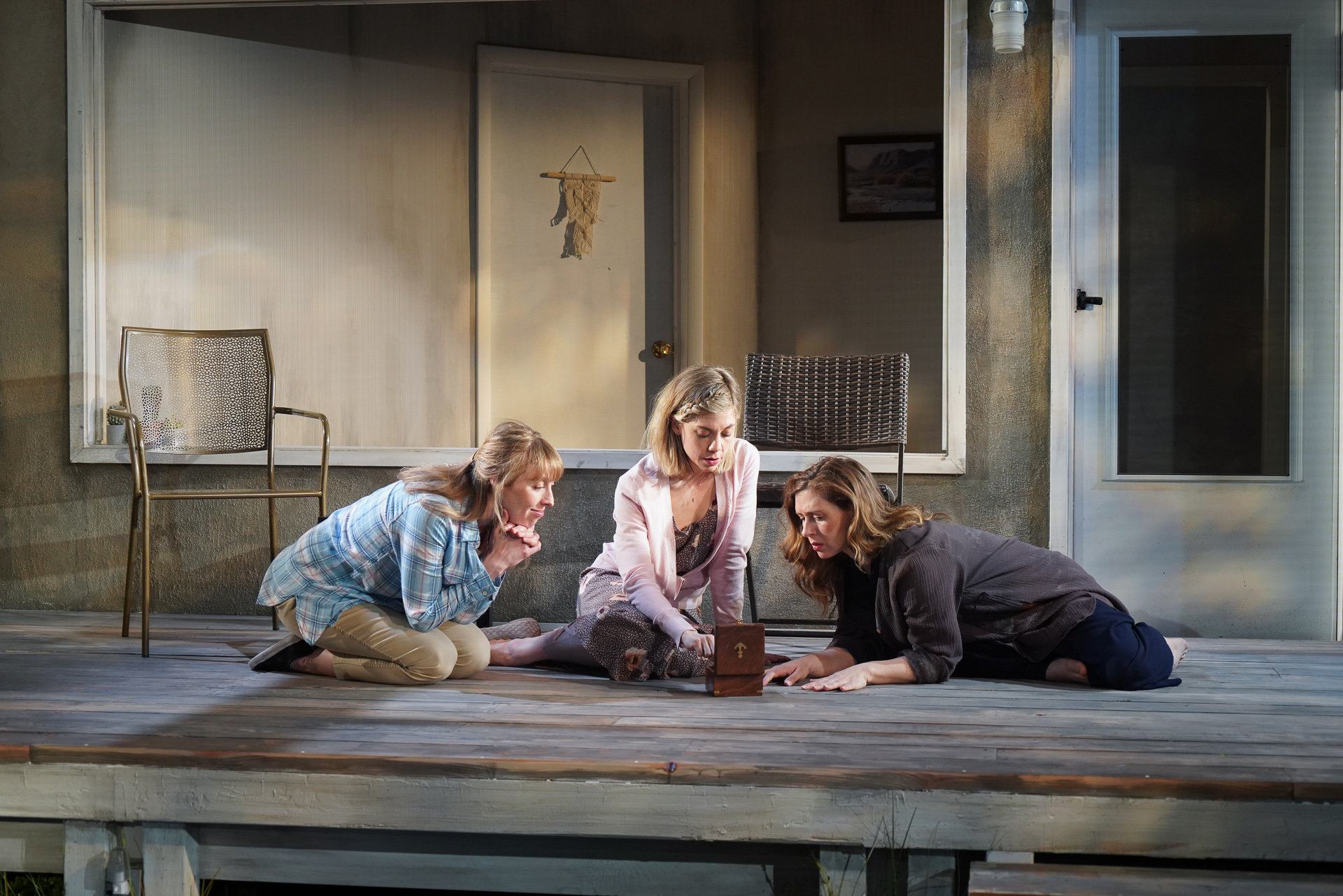 This casual, self-deprecating dialogue about celestial forces is emblematic of the cocktails Will mixes, ones where the real and surreal are poured in equal measure. And Isabel’s speech unearths an acute and cyclical Catholic sentiment: the vocation of service, the entire giving of yourself, and the self-induced pain this service inflicts. Wash, pray, repeat.

If Isabel’s calling is spiritual in nature, Maiworm’s is pragmatic while stemming from a similar impulse. In Will’s play Evanston Salt Costs Climbing, an ode to street salters who are confronting both climate change and the mechanized trucks who will replace them, Maiworm is a striving, suburban public works administrator whose ethics inform not only her job but also, she feels, the safety and wellness of others.

“Will’s, and his characters’, instinct to serve others weighs against the American compulsion to grasp for power.”

Such commitments to service are ones Will enacts in his own life — specifically, within his community of theater-makers. To open doors and increase access, Will maintains an ever-evolving and widely shared document that collects information about open residencies, writers groups, and myriad artistic opportunities. He has also amplified his peers’ voices via The 53rd State Occasional, a journal that invites guest editors to pose a question to fellow creators and then record their responses for publication. Will’s, and his characters’, instinct to serve others weighs against the American compulsion to grasp for power. If capitalism rewards those who climb toward leadership, and our Manifest Destiny heritage justifies conquering by force, his work sits in contrast with the culture. As Noahs and lamed-vavniks, saints and public workers, Will’s characters use their heaven-sent and elevated platforms to better not themselves but rather their fractured, confused worlds.

Will’s newest play Heroes of the Fourth Turning is both a natural extension of his service motif and also a radical shift in what it reveals. In Heroes, Will’s timely, eerie drama about Catholic conservatives in Wyoming, Teresa is a zealous 20-something who does not self-sanctify (she’s too God-fearing to raise herself to such a stratum) but indeed identifies as a “Hero,” anthropologically speaking. She (and the play’s title) is referring to William Strauss and Neil Howe’s generational theory: there are four turnings, or generational phases lasting two decades each, and within each turning is an archetype to define it. According to this theory, Teresa and her cohorts are “Heroes,” meaning they will rise to fix the Crisis, the fourth and final turning, before the cycle begins anew.

Unlike Will’s other characters, whose assistive roles are localized to the universes of their homes, communities, and families, Teresa’s calling is one that impacts a nation. She hopes to spark urgency in Republicans, who, though in power, she feels are anything but: Planned Parenthood is still operating, Democrats are mobilizing, and the media relentlessly criticizes Trump. As a Hero, she takes up the mantle of the leaders who precede her; there’s a stark but indirect comparison of Trump to Jesus when she says the president’s “come to save us all.” She clings to her Heroic duty with a stinging paranoia, and, through her, Will examines what happens when self-appointed servants morph into self-knighted warriors. Now revisiting her alma mater in the red state of Wyoming, she’s frustrated by how unconvinced her friends are that she and their party are fighting for survival.

“She hopes to spark urgency in Republicans, who, though in power, she feels are anything but.”

And what if someone’s purpose is not to protect your world but oust you from it? Will’s characters champion themselves when no one else will recognize their potential, but in Heroes, he distinguishes what erupts when roles of service are weaponized. But who knows if Teresa will ever gather her army; Will’s plays highlight, again and again, the shepherds struggling to find their flock, even as the sheep are hungry for truth, starved for community.